Implications of the Paris Agreement for the German transport sector 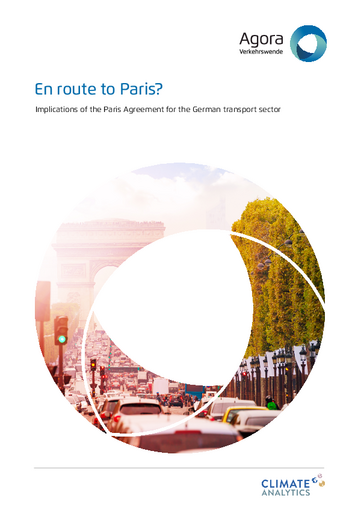 When the global community ratified the Paris Agreement four years ago, its goal was to hold global warming well below 2°C and to pursue efforts to limit it to 1.5°C above pre-industrial levels. Yet global greenhouse emissions in the ensuing years have continued to hit record levels. To put it bluntly, the climate measures taken so far have been woefully inadequate, and the Paris targets risk slipping out of reach.

This ever-widening gap between what the global community is doing and what it needs to be doing was one of the reasons for undertaking this project. We wanted to know more about Germany’s role in closing this gap and therefore commissioned a study to determine whether the country in general and its transport sector in particular are on track to meet the Paris targets.

The study’s findings are a sobering read. The package of climate-related measures that the government recently put into effect hardly suffices to reach Germany’s own 2030 targets, let alone those needed to keep global warming below 1.5°C. On its current course, Germany would not even meet the previous target of 2°C, which was the global standard before the Paris Agreement.

The new EU Commission, under the leadership of Ursula von der Leyen, plans to recommend within the next 100 days that Europe significantly increase its greenhouse gas reductions targets for 2030, from the current 40 per cent to 50–55 per cent relative to 1990 levels. The German presidency of the European Council in the second half of 2020 and the scheduled revisions of the National Determined Contributions (NDCs) for 2020 offers Germany the opportunity to finally make good on its Paris Agreement commitments. But Germany must not only ensure that its emission targets are consistent with the Paris goals. It must enact the measures needed to reach them.

This study identifies how quickly emissions must fall for the Paris climate targets to be achievable. Further reductions for 2030 represent an immense challenge, especially in the transport sector, whose emission levels have changed little since 1990. But anyone who is serious about fighting global warming must be ready to take on this challenge.