Fit for 55 for transport professionals 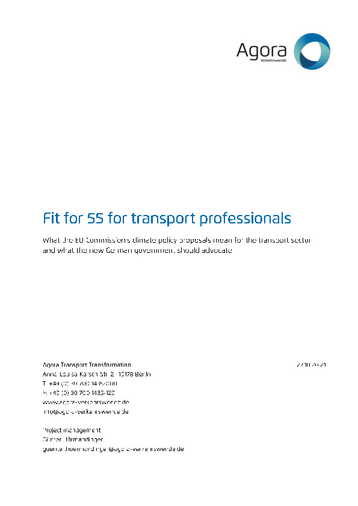 The excitement of the early days has died down since the European Commission presented its climate change proposals known as the Fit for 55 package in July this year. The wealth of details in the Commission's 14 legislative proposals does not make it easy to concentrate on the key points. This is why we have compiled an overview of the most important aspects for the transport sector in this paper. In some places we also recommend positions that the new German government should take during the negotiations on the package. These are summarised in a list at the beginning. The main text provides justifications for these proposals and contains several further observations, in some cases combined with rough quantitative estimates, which are meant to facilitate the assessment of the Commission's proposals.

The German government will only be able to achieve its national climate protection targets if it also lends its support to an effective Fit for 55 package. The effectiveness of this effort depends above all on the ability to put together a coherent overall package from the many different instruments and measures - at European and national levels. Those who blindly charge ahead without considering the issue in its entirety are bound to fail. The same applies to attempts to rely solely on subsidies and incentives or on emissions trading. There is no panacea for climate change, especially not in the transport sector, which is more dependent than others on demand-side decisions.

The present paper is not a manifesto, but a working document; it does not deliver a final verdict, only comments on an intermediate state. It is intended to facilitate the work of all those who wish to become involved in or critically accompany the decision making process.