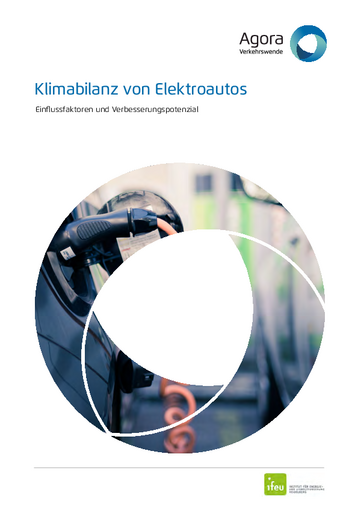 Automobiles play a key role in the transport sector – and they will continue to do so in the future. Given the threats posed by climate change, however, automobiles must become more climate friendly. But when can a car be described as climate friendly? Is simply running on electric power enough? According to vehicle registration statistics, electric vehicles do not release a single gram of CO2. Yet harmful emissions are released when generating the electricity used to power electric vehicles, as well as during the vehicle manufacturing process. It is therefore reasonable to ask whether electric vehicles are really more climate friendly than cars that run on gasoline or diesel. While a number have studies have compared the total carbon footprint of conventional and electric vehicles, their findings diverge – in some cases considerably.

With this study, we hope to shed more light on this important issue. To produce the study, the Institute for Energy and Environmental Research in Heidelberg (IFEU) conducted a detailed assessment of the carbon footprint of electric vehicles.

Currently, half of the electricity used to power electric vehicles in Germany is produced from coal and natural gas. Furthermore, a great deal of energy is consumed to produce electric vehicle batteries, which causes CO2 emissions in the countries of manufacture (primarily China, Japan, and South Korea). As a result, electric vehicles have a larger carbon footprint than conventional vehicles when it comes to the manufacturing process; to make up for this disadvantage, an electric vehicle must be driven for several thousand kilometers with low-carbon power.

Nevertheless, on the whole, electric vehicles are currently more ecological than their conventional counterparts.  Furthermore, their ecological advantage over conventional vehicles will continue to grow in the future as industry taps opportunities for reducing carbon emissions in power generation and vehicle production.

The study confirms our view that the broad adoption of electric vehicles is crucial for a successful energy transition in the transport sector. Accordingly, in our future work we intend to make dedicated efforts to improving the carbon emission profile of electric vehicles – for they are ultimately the key to emissions-free transport. The study makes a valuable contribution toward realizing this vision.

Decarbonization of the Indian transport sector